With a range of 500km, the Toyota BZ4X makes its way into the saga of 100% electric cars from the renowned Japanese brand.

Toyota has a history of more than 20 years, being a leader in the manufacture of vehicles at an international level. Since the launch of its Prius car in 1997, this company has done nothing but grow and lead the car market, with hybrid vehicles being the protagonists.

The experience in electrification has served to launch a strategy called “Beyond Zero“, a new sub-brand of 100% battery electric vehicles (BEV). An electric family that has been long in coming as it has taken its approach to BEVs calmly, considering that it is a territory that “was still green”.

The bZ4X is the first model in the BeyondZero family. However, it is not the first electric the Japanese brand. Before this model, the Toyota RAV4 EV (1997) and the Toyota IQ EV (2012) hit the market, in both cases as an electric conversion of cars that were already manufactured with a combustion engine.

For the development of its new electric car, Toyota has teamed up with Subaru, resulting in three models: the Toyota bZ4x, the Subaru Solterra, and the Lexus RZ 450e.

Outwardly, this zero-emission Toyota has its design with a front whose features have nothing to do with the rest of the current Toyota range. In other areas, it recalls the Toyota RAV4 in some details such as the shape of the C-pillar or the angular black wheel arches.

A curious fact: the bZ4X can have a photovoltaic solar roof that will be available in 2023. With it, up to 225W/h of electricity generation is obtained, which allows the lithium-ion battery to be fed (with the car stopped) and elements Auxiliaries such as radio, lights, etc. 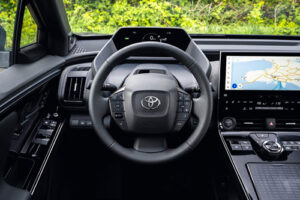 Inside, it doesn’t look like any other Toyota either. The position of the steering wheel and the instrumentation are reminiscent of Peugeot’s peculiar i-Cockpit, although Toyota has opted for a normal diameter steering wheel. A steering wheel that has a multitude of buttons and whose upper part can cover part of the information on the instrument panel depending on the size of the driver and his driving position.

The quality of the materials is fine, but the available equipment is abundant. The first Toyota bZ arrives with the Advance and Style and you can enjoy a multimedia system with a 12.3-inch screen, a wireless smartphone charger, a 360-degree camera system, or a panoramic sunroof. 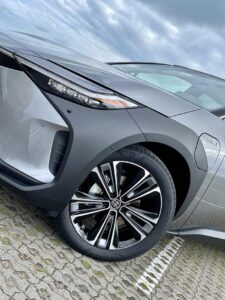 The Toyota electric is available in two versions: front-wheel drive and all-wheel drive. The 4×2 variant uses a 150 kW (204 hp) electric motor and achieves acceleration from 0 to 62 m/h in 7.5 seconds. The 4×4 option has two independent electric motors for each axle, both of 80 kW to total 218 CV of power and an acceleration capacity of 6.9 seconds to 62 m/h from a standstill.

Reliability is one of the pillars of Toyota and to prove it the battery life is guaranteed for 10 years. Toyota ensures that it maintains at least 70% of its capacity. The Japanese brand has implemented monitoring of voltage, amperage, and temperature at a triple level, that is, at the level of each cell, each module, and the battery as a whole.

The new Toyota bZ4X can now be reserved exclusively online and, from October, also from dealers. The first deliveries will be made in December. As you can see, the arrival will be very staggered to the point that Toyota has not even announced the final price of the vehicle because it cannot be purchased, but as the rate of production increases, it will predictably be available in a format of traditional purchase but for now, we have to wait.