Let’s talk about Porsche: The guide that will allow you to know its models.

Porsche was founded in Germany, 1931, being today one of the most famous car brands worldwide; distinguishing themselves for being stylish, entertaining, and durable enough for highway or city trips.

​​Air-Cooled: Through the late 90s, the model 911 had air-cooled engines, which ran air over the engine oil to cool the engine rather than using a water-based radiator. Porsche replaced them with water-cooled engines for better performance and reliability.

Boxer Engine: An internal combustion engine with horizontally-opposed pistons. It helps to lower the car’s center of gravity. Production is usually more expensive than a V-shaped engine, however, which is why it is used less commonly.

Carrera: Porsche initially used the term to celebrate class wins in Mexico’s Carrera Panamericana in the 50s. Porsche has used the term over the decades to designate racing-oriented models.

PDK: Short for Porsche Doppelkupplunggetriebe, or “Porsche dual clutch gearbox.” Known for its exceptionally quick shifts. It is the only transmission choice on top-tier 911s, as well as on all Panameras.

RS: Stands for “rennsport,” which means “racing” in German.

Tiptronic: An automatic transmission with a manual shifting mode.

Turbo: The term “Turbo” originally designated a turbocharged engine. Now that almost every Porsche is turbocharged, “turbo” means a powerful, high-performance version of that particular model.

What about if I want to buy a Porsche? Here you have a complete buying guide: 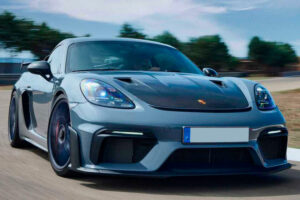 It’s a two-door, two-seater, rear mid-engined coupe. The 718 Cayman is recognized as one of the gold standard driver’s cars on the market. Porsche debuted the current fourth-generation in 2016 with a controversial shift to from flat-six to flat-four engines. Most 718 models can be fitted with either a six-speed manual or a seven-speed PDK. 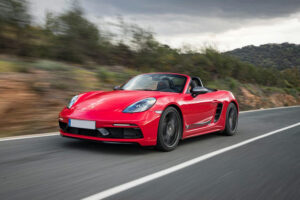 It debuted as Porsche’s more affordable car for the 1997 model year. The current generation is a mechanic 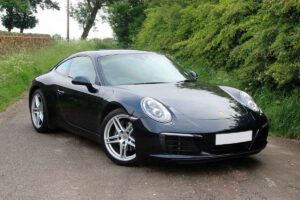 This is Porsche’s legendary two-door, two-plus-two seat, rear-engined sports car. The base model 911 uses a 379 hp engine and comes in Carrera hardtop, Carrera Cabriolet and Targa body styles. “S” versions upgrade to 443 hp and offer a seven-speed manual transmission. “4” versions have all-wheel-drive instead of rear-wheel-drive.

There are two veins of high-performance 911. “Turbo” versions shoot for all-out supercar performance with the Turbo S packing 640 hp and accelerating from 0-60 mph in just 2.6 seconds. The GT3 is more of a 911 purist’s model, with a naturally-aspirated 4.0-liter boxer-six and a manual transmission. 911 GTS models provide a middle ground on price point and performance between the base and top-end models.